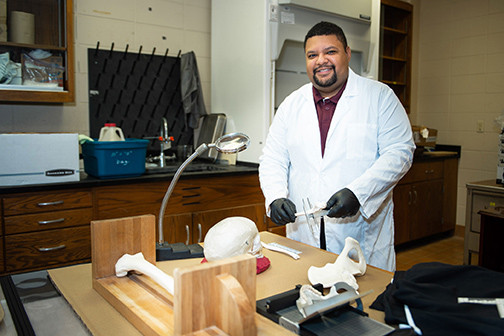 
Mississippi State University’s Jesse Goliath, an assistant professor in the Department of Anthropology and Middle Eastern Cultures, recently was appointed the American Anthropological Association’s (AAA) liaison to the Register of Professional Archaeologists (RPA).

RPA’s mission is to promote and maintain professional standards and ethics in the dynamic field of archaeology and to provide a resource for parties who rely on professional archaeology services like Cultural Resource/Heritage Management firms, the U.S. National Park Service, and Historic Preservation Offices. The RPA currently has around 4,000 archaeologists from 16 countries.

As liaison, Goliath will aid in developing strategic initiatives for recruitment and engagement efforts in archaeology, as well as communicate shared interests and maintain transparency between the two organizations.

“I am excited about this opportunity because it will allow me to engage with peers in both the academic and professional realms of archaeology, promote early career development, and cultivate diverse representation for professional and academic archaeology, especially in regard to first-generation scholars and historically underrepresented populations,” Goliath said.

Goliath earned his bachelor’s degree from the University of Notre Dame in 2007 and his Ph.D. from The Ohio State University in 2017. Prior to coming to MSU, Dr. Goliath was a government contractor helping identify missing U.S. service members from past war conflicts.

The Charleston, West Virginia, native joined MSU’s Department of Anthropology and Middle Eastern Cultures in 2021 as an assistant professor, where he teaches forensic and biological anthropology classes and serves as a consulting forensic anthropologist for the state of Mississippi.

Part of the College of Arts and Sciences, MSU’s Department of Anthropology and Middle Eastern Cultures is online at www.amec.msstate.edu.